From The Pokemon Insurgence Wiki

Lernean is an ability exclusive to Pokémon Insurgence. It is the signature ability of Mega Hydreigon.

Pokémon with Lernean will gain more heads if their HP decreases below 80%, 60%, 40%, or 20%, gaining multiple heads if their HP falls below multiple of these thresholds at once. Restoring HP does not remove heads and more heads will not generate if a threshold has previously been reached. Lernean then splits the power of the user's damaging moves across each head. The move hits n times and each hit's damage is calculated as follows:

n is the total number of heads that Hydreigon currently has, defined by its sprite,

d is the amount of damage calculated before applying Lernean,

r is the remaining number of hits to be executed.

If none of these attacks are negated or blocked by effects such as Substitute then the total damage multiplier that the attacker experiences is 1.15 + 0.075 × (n - 5).

Example: If the user's attack is calculated to deal 60 damage before applying Lernean while the user has 6 heads: 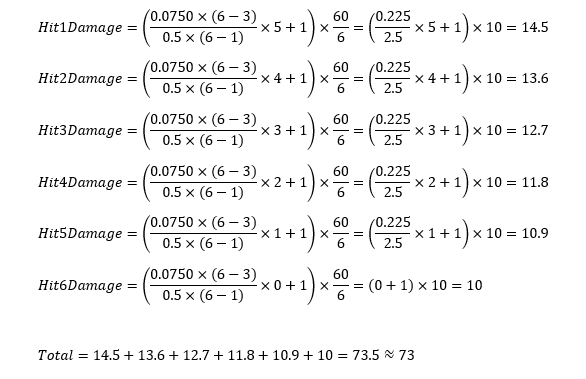 Lernean will only trigger additional effects of an attack once despite hitting a target multiple times. Moves that hit multiple times under the effects of Lernean will trigger the effects of Iron Barbs, Rough Skin, Prism Guard, and Rocky Helmet on each hit. Moves which change the user's stats will occur after all hits have transpired. Multi-strike moves, set-damage moves such as Dragon Rage, and the moves Self-Destruct, Explosion, Natural Gift, and Fling will not activate Lernean.

Lernean has no effect outside of battle.